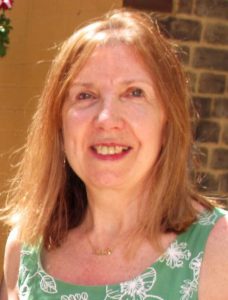 Focusing has developed in Europe through many different routes.  The practice of focusing as a taught procedure often grew from the experience of individuals who had trained in the US in the 1980s or were taught focusing by visiting American practitioners.  Elsewhere, focusing has been integrated into programmes where the person-centred approach has been taught as part of a degree in psychology or as a part of a broader professional training.

In the UK, as in several other European countries there have been parallel streams of development.  As Rob Foxcroft has described in ‘Focusing in the United Kingdom’, the British Focusing Association (BFA), which was formed in 1994, was the result of a collaboration of individuals who had all been trained in focusing by different US-based practitioners.

At the same time as the BFA was being dreamed into existence by Rob Foxcroft and his peers, my friend and colleague Campbell Purton and I were being trained in the person-centred approach by Dave Mearns and Brian Thorne.  We both became employed as counsellors at the University of East Anglia (UEA) and in 1993 I joined Brian Thorne as a trainer on the UEA Diploma in Person-Centred Counselling and Psychotherapy. Both the course on which I was trained and the one where I taught acknowledged focusing as part of the Person-Centred Approach, but focusing was regarded as a ‘technique’ and therefore incompatible with the principle of ‘non-directivity’ that lies at the heart of the PCA.   For several years I was responsible for teaching one session a year on the ‘six steps’ of focusing. I was always surprised by how effective it was when I worked with individuals as a demonstration, but I never understood in those early years how focusing relates to the theory of the PCA or how understanding of the felt sense might be subtly- and helpfully- integrated into clinical practice.

I remember early international conferences (the equivalent to those now held on behalf of the World Association for Person-Centered and Experiential Psychotherapy and Counseling (WAPCEPC)) where focusing workshops were offered.  I enjoyed some of these workshops, but focusers in general were regarded with mistrust and even some hostility. In part, this was probably down to intense rivalry between the ‘Person-Centred’ and ‘Experiential’ strands of the Approach, which was in part a battle between ‘non-directivity’ and ‘directivity’ (Emotion-Focused Therapy (EFT) was developed in the late 1980s by Robert Elliot, Les Greenberg and Laura Rice and included focusing as one of the ‘techniques’ by which clients could access deeper emotional experiencing).

Despite the anger and confusion that seemed to gather around focusing in these early conferences, in 1994 Campbell Purton and I were both profoundly affected by a Japanese presentation on ‘Client-Centered Therapy in Japan: Fujio Tomoda and Taoism’. This inspiring and life-changing presentation was given by the Japanese Rogers Group- Sachiko Hayashi, Toru Kuno, Yoshihiko Morotomi, Mieko Osawa, Mikio Shimizu and Yasuhiro Suetake.  The presentation questioned our Western understanding of ‘the self’, explaining how both Dogen, a Japanese Zen priest of the early 13th Century, and Gendlin’s ‘anti-substantial concept of self-process’ had influenced Tomoda in his wish to avoid ‘the definition of self as a conceptual entity’.  To develop our understanding, and, taking separate but what turned out to be complementary and extremely compatible routes, I began to study and practise Zen Buddhism,  Campbell meanwhile began to study Gendlin’s philosophy and eventually he trained in focusing with Barbara McGavin (a member of the newly-formed BFA group). A new understanding of focusing/ ‘the self’ had begun to open up to us.

Campbell’s enthusiasm for Gendlin’s philosophy and his deeper understanding of the practice led to us eventually integrating weekly focusing sessions into our one-year PCA training and, in 2005, with the support and encouragement of Mary Gendlin, we launched a diploma in Focusing-Oriented Therapy at UEA. This was the first time that focusing formally became part of the academic programme in a British University.   Many students later chose to deepen their understanding of focusing through Masters’ level research and several students have written PhD theses on focusing-related topics over the past ten years.

The professional training in FOT ran until 2017 when all the UEA counselling trainings were closed down by the university.

The first International Focusing Conference I attended was that held in the Netherlands in 2006.  It included a Remembrance Service where several delegates recalled their experience of the trauma of war.  The fact that the conference took place in a country that had been invaded and occupied within the living memory of some of the participants brought especial poignancy to the occasion.

There are 24 official languages in Europe and, despite English being the most commonly used language, the majority of us are not native English speakers and our cultural norms are very different.  Living in Europe also involves acknowledging and working with the residue- fear, prejudice, hostility, loss, shame- of many old enmities, particularly those that have arisen from the suffering experienced on all sides during and after the Second World War.  More recently, relations have been affected by the very different economic status of countries within the EU. However much we might wish that these difficult feelings did not exist, it takes skilled listening and careful communication to overcome our many differences and to discover a sense of commonality and shared understanding.

To this end, a group of European Co-ordinators came together in Gengenbach in Germany in 2009 with the dream of planning a Focusing ‘academy’ where European focusers could ‘cross borders’ and contribute to the healing of some of these old wounds by working and learning from each other in a cooperative and non-hierarchical way.

After several meetings and many discussions over the years that followed, the European Focusing Association (EFA) was born.  It is described as ‘a European network for focusers, focusing professionals and focusing practitioners who wish to develop focusing and the experiential approach through collaboration, openness and mutual support’.  EFA’s Vision Statement was presented at the Cambridge International Focusing Conference in 2016 and can be found on the EFA home page (https://efa-focusing.eu/).

The Association is run by volunteers and no subscription is charged.  The aim is for the ‘life’ of the Association to come from interest groups who work together on specific topics (e.g. teaching, coaching, wholebody focusing, spirituality). Group members might come together in person at an annual meeting, but most of the time we communicate with each other through the Internet and the website.   A Steering Group takes responsibility for communications and for taking steps to ensure that a next annual gathering will take place.

The First European Focusing Association Conference, ‘Facets of Focusing’, a celebration of the life and work of Eugene Gendlin, was held in Greece, under the auspices of the Hellenic Focusing Association, in May  2018.  It was soon fully booked and over 130 delegates enjoyed a rich variety of presentations and workshops, savouring the warmth and hospitality of the Greek culture in the beautiful surroundings of the Hotel Pappas at the coastal resort of Loutraki. A more detailed report of this inspiring gathering can be found on the conference website at https://efa2018.weebly.com/news. 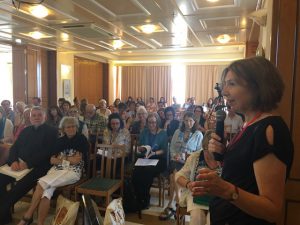 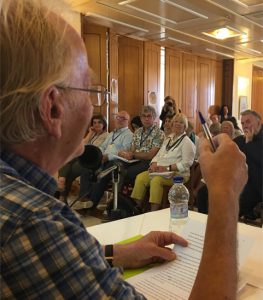 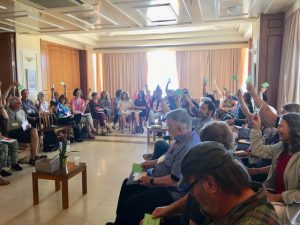 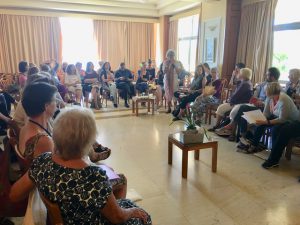 Greek conference excursion to the ancient theatre at Epidaurus 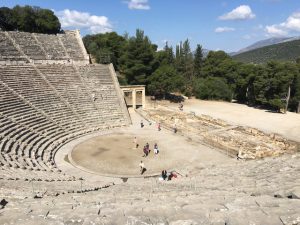